Last year I made a ton of fun Halloween decorations! These were really fun, so I thought I’d share this year! Many free crochet patterns and a fun crafting project with acrylic paint and jars.

These little guys seemed likely to tip over, so I put a few unpopped popcorn kernels in the bottom of each ghost so that they sit bottom heavy. 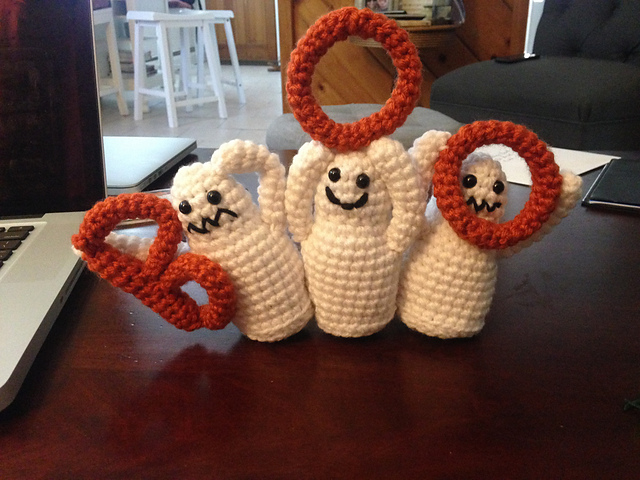 I crocheted the cover on orange and black, and used black yarn to attach the pieces together. Then, I used hot glue to attach little spiders I bought at Michaels.

I actually sewed these together to make a continuous sleeve instead of attaching buttons. I was afraid if I used the buttons that they might not be very sturdy (and may result in a dropped coffee). I also ended up slip-stitching around the bottom of the sleeves later to reinforce them so they don’t slip up too far.

I’m actually not as fond of these. The patterns are great, I just think they look a little messy. But my fiance really likes them, so we use them!

We looked at a bunch of different ideas on Pinterest, but here are links to a few that gave us inspiration:

We also tried this maple leaf jar, but after a little bit the leaves turned brown. Does anyone know how to prevent that?